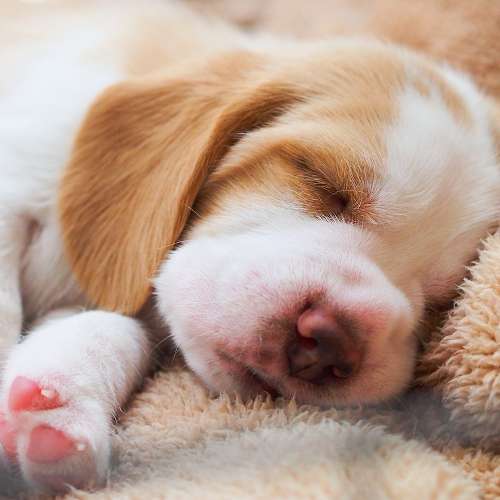 Ok, we’re going to be honest, we were more than a little sceptical when we heard people talking about their dogs smelling good when they sleep. It’s a popular question on sites like Quora and Reddit, but surely people are just imagining it? After all, why would sleeping make a dog smell noticeably different?

Well, it turns out we were wrong! There actually is a scientific reason why dogs smell good when they sleep.

So, if you’ve noticed that your dog has a satisfying sleepy scent, read on to find out why.

How Do Dogs Give Off Smells?

A dog’s smell is a combination of odours from various parts of the dog. These include smells from bacteria on the dog’s body, dirt and other substances that may have gotten into the dog’s fur, the dog’s breath, passing wind, and smells from the apocrine glands.

The aprocine glands are sweat glands located at various places around the dog’s body. Dogs have sweat glands even though they don’t sweat to cool down. Instead, these glands are used to give off pheromones, which are chemical signals to other dogs.

Two of the largest aprocine glands are in the dog’s rear, which is why dogs like to sniff each other’s bottoms! (And why it’s particularly unpleasant to have your dog stick their bum in your face!)

Why Do Sleeping Dogs Smell Different?

There are a few reasons why your dog might smell different when sleeping. Or why you might notice your dog’s smell more when they are asleep.

Firstly, when sleeping, your dog stays in one place. So, rather than moving around the house spreading their smell around different rooms, the smell of the dog lingers in one place for the whole time they are asleep.

Secondly, dogs often sleep curled up in a basket or on blankets. Not only can these items smell of your dog – and therefore add to the smell in the area – they also raise your dog’s body temperature. This increase in body temperature can make certain bodily smells, such as those caused by bacteria, more pungent and noticeable.

The most common description of what a dog smells like while sleeping – or just after waking up – is corn chips. There are lots of examples of people asking why their dog smells like Fritos!

The main reason why dogs smell like corn chips when they are sleeping is the proteus bacteria that lives on their feet. This bacteria causes a smell that resembles sweet tortillas. When your dog sleeps curled up in a blanket, their feet warm up, the production of this bacteria increases, and you start to notice the corn chip smell.

Other bacteria that also contribute to your dog’s smell include yeast, and pseudomonas, which smells like popcorn.

So it’s no wonder that dogs smell so good when they sleep – their paws are home to colonies of bacteria that smell of corn chips and popcorn!