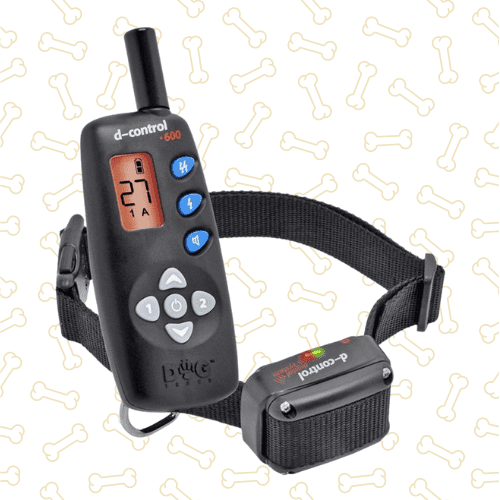 At Dogtelligent, we believe dog shock collars are cruel and do not recommend their use.

Regardless of the voltage, all shock collars give the dog a painful – or, at the very least, extremely uncomfortable – electric shock.

Below, we explain what dog shock collars are, how they work, why they’re cruel, and what you should use instead.

What are dog shock collars?

Dog shock collars are a type of collar that gives a dog an electric shock when the owner presses a button on a remote control.

Shock collars are used to train dogs in a variety of ways, including staying within a certain distance of the home, walking close to heel, and not barking too much.

How do dog shock collars work?

Shock collars are placed around a dog’s neck, just like an ordinary collar. However, unlike ordinary dog collars, shock collars have two metal prongs which press against the dog’s skin.

When the owner presses a button on a connected remote control, an electrical current passes between these prongs. This administers an electric shock to the dog.

The theory is that dogs will learn to not do certain things (such as bark) because when they do, they get a painful electric shock.

At Dogtelligent, we strong advise against the use of shock collars, not just because they are cruel (and, in some places, illegal) but because they’re also an inefficient way of training a dog.

It’s important to realise that dogs don’t necessarily make connections between events in the same way that humans do.

While it may seem obvious to us that the dog is getting a shock every time they bark, or run away, or beg, the dog may not connect the pain from the collar with its recent actions.

And if the dog doesn’t connect the pain to the bad behavior, they’ll learn nothing.

Are shock collars cruel to dogs?

We think the answer to this is quite obvious yes. Dog shock collars are cruel.

The entire theory behind dog shock collars is that the dog learns not to do certain things because they don’t want to suffer discomfort and pain.

So, to train your dog using a shock collar, you have to administer painful electric shocks to your pet.

Clearly, this is something that any responsible dog owner should not want to do.

It has also been proven that shock collars can cause stress, anxiety and phobias in dogs of all ages. And they are even more dangerous and damaging for puppies.

This study concluded: “The conclusions, therefore are, that being trained is stressful, that receiving shocks is a painful experience to dogs.”

Dog shock collars are currently legal in the United States. Though there have been many recent campaigns and petitions to ban them.

In the UK, dog shock collars have been banned in Wales. However, they are still currently legal in England, Scotland and Northern Ireland. In 2018, the UK Government said that it would ban shock collars across the country, but no legislation is yet in place.

The use of shock collars has also been made illegal in the following countries and regions:

What should you use instead of a dog shock collar?

One of the saddest things about dog shock collars is that they encourage people to train a dog through punishment rather than reward.

This is sad because positive reward makes the dog happier, is more pleasant for the owner, and is more effective too!

If a dog ignores the heel command and runs away during a walk, shock collars encourage owners to give their dogs a painful electric shock. Not only is this cruel, the dog probably won’t even know why it happened. They will most likely thing the shock is happening randomly, or is linked to their environment rather than their actions.

Why do that when you could reward your dog instead?

A positive reward – such as a treat whenever the dog returns to your side or stays close by as you say “heel!” – is fun for you, nice for your dog, and doesn’t involve any pain or suffering.

To us, the choice is clear. Why inflict pain on your dog, with cruel electric shocks of up to 6000 volts, when you could get a nice normal collar, like a martingale collar or a rolled leather collar for instance, and positively reward your dog’s good behavior instead?

What do you think? Would you ever use a shock collar on a dog? Let us know in the comments.